Beyond (R) Recipe Without Cereal offers a wide selection of cat food to help maintain your health with the same great nutrition you expect from us. Going beyond cereals, we expanded our offer of cat food by offering an alternative combination so you can choose the one that is best for your cat. This recipe without cereals has recognizable ingredients that you trust, which provide your cat with high quality proteins.

DAILY RATION AND USE

How to use and recommended daily ration: for a medium adult cat (4kg) serve 3 cans a day in at least 2 separate meals. The average maintenance rations for adults are based on cats with moderate activity under normal environmental conditions. Individual needs vary and the amount of food should be conveniently adjusted to keep your cat at a lean and healthy body weight. Always leave clean and fresh water at its disposal.

In Huella Canina sending us very concerned and we make every effort to meet deadlines we have committed.

With SEUR and POST Express, if at the time of delivery is not you in the shipping address, will leave a notice and / or will contact you to fix delivery.

With Post Office you can pick up the order at your nearest post office. Locate nearest Office in www.correos.es

With SEUR PICKUP you can pick up the order at the nearest store. Locate the collection point in www.seur.com 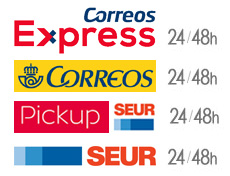 Shipping on weekdays for orders placed before 14: 00h Monday through Friday.

You offers on a credit card discharged in your bank to operate in safe Internet shops.

You will receive your order on the shipping address you have chosen and you will be cashed to give it to you.

Securely pay your orders by indicating your mobile number and Bizum password.

Your order will be shipped when we receive the payment or transfer of the amount.
The unpaid order will be automatically deleted in 5 days.

Pay your order securely through PayPal. ¿What is PayPal?

You can make your payment in store to pick up your order.

(*) To pay with PayPal, Contrareembolso and Income/Bank Transfer minimum order will be 49€.

<< SEE ALL PRODUCTS PURINA BEYOND

We believe that when people and pets come together, life is better. It’s a sentiment that has been part of our businesses through time and really brought to life through the PURINA® brand that William H. Danforth created in 1904. This belief is now placed at the heart of everything we do and the products we make across the globe

The PURINA® we know today is the coming-together of three established pet care businesses: PURINA®, SPILLERS® and FRISKIES®. Each has its own rich heritage, and has played a vital role in establishing PURINA® as a global leader in pet nutrition. Want to find out more? Use the tabs below to discover each brand’s unique history.

Joel Spiller sets up business as a Corn Factor and Dealer in Bridgewater, Somerset.

Spiller and Co. takes on a second premises – a bakery in Cardiff. The company’s first ever dog biscuits are produced here shortly afterwards.

Spiller and Co. merge with Bristol-based William Baker and Sons to become Spillers and BAKERS® Limited.

Along with George Robinson and William Andrews, William H. Danforth founds the Robinson-Danforth Commission Company. Together they set about the business of manufacturing feed for farm animals, changing the name to Ralston PURINA® in 1902.

Spillers and BAKERS® Limited launch SHAPES – a brightly coloured biscuit for dogs. 100 years later, and SHAPES is still available in the shops!

World War I is declared on 28th July. By this time, Spillers is producing 18 different varieties of dog biscuits at factories in Cardiff, Bristol, London, Newcastle and Birkenhead.

The world’s first research centre for canine nutrition is opened in Seattle, USA by the Carnation Corporation – the company behind Friskies.

Almost a hundred years after its foundation, Spillers continues to expand dramatically, taking over no fewer than seven subsidiary companies by 1923.

PURINA sets up the very first pet nutrition and care centre at PURINA® Farms, near Gray Summit, Missouri. Here, PURINA® experts would formulate and test their pet food products to ensure they were both appealing in taste and highly nutritious. Today, this centre has evolved into the Nestlé PURINA® Pet Care Centre in Northwest Missouri.

Spillers is officially fit for royalty, as the brand is granted the Royal Warrant for dog food.

WINALOT® is launched as a specialist food for greyhounds – fuel to ‘win a lot’ of races! At the same time, the company decides to unify and consolidate its sub-brands, and re-launches under a new name: Spillers Limited.

The pet food and animal feed trades take off, with Spillers’ WINALOT®, SHAPES and SAVAL all becoming UK brand leaders.

With the War came rationing – and a severely restricted supply of flour for dog biscuits. The use of tin plate for canned pet foods is also prohibited.

Friskies bring something new to the pet food market… their first ever range of canned wet food for dogs.

Following the success of their canned wet food for dogs, Friskies share the love with their feline friends and launch their first range of tinned cat foods.

Restrictions on flour and other cereals are finally lifted, leading to a new surge in the bakery and pet food markets – and intense competition.

PURINA® celebrates another world first, as Purina Dog Chow® becomes the first pet food made using extrusion technology. This same technology is still used to make the distinctive shapes we know as ‘kibbles’ to this day.

PURINA® answers the needs of a growing population of American housecats by launching a new range – Purina Cat Chow®.

It’s a busy year for Spillers. Not only do they set up the Spillers Nutritional Centre and Pet Care Unit, they also buy out Wright & Company Ltd., acquiring Wright’s ALL-IN-ONE biscuit brand in the process.

Two more leading pet food brands are added to the Spillers mix – this time, STAMINA for dogs and PAWS for cats. Both are acquired from the takeover of Stamina Foods, a sub-brand of Rank Hovis McDougall Ltd.

Always one step ahead of the competition, Friskies launch GO-CAT® – the world’s first 100% complete and balanced dry cat food.

The Spillers Group is bought out by the Dalgety Group for £72.5 million.

Nestlé S.A. acquires the Carnation Corporation, including Friskies Pet Food. Together, they decide to keep the Friskies name to become Friskies Europe.

Ralston sells the PURINA® Mills animal feed business so that the company can focus on dog and cat food.

PURINA® launches its groundbreaking 14 year study, which scientifically proves that feeding dogs to their ideal body condition can help them to stay healthier for longer. In the same year, PURINA® establishes Pets for People – a dedicated resource to help re-home shelter animals. Today, Pets for People is involved with nearly 6,000 welfare organisations in the US alone. The Pets for Seniors program is set up shortly afterwards, helping reduce pet adoption costs for American senior citizens at 150+ shelters.

A new year, an exciting new acquisition for Friskies Europe. This time, it’s ALPO Pet Foods (USA), the brand whose spokesman, Lorne Greene, had such faith in its produce, he even tasted the food for himself!

Paragon Petcare, with manufacturing plants in France, Germany and the Netherlands is acquired from BP Nutrition Ltd, adding the BETA® brand to the company’s UK portfolio, and the DOKO and DOKAT brands in Europe

Almost 170 years after its inception, Spillers Pet Foods joins forces with Nestlé S.A. to become one of the world’s largest pet care companies.

On 12th December, Nestlé takes on Ralston Purina to become Nestlé PURINA Pet Care, a move which helps increase the availability of PURINA® products across the globe – much to the delight of pets and owners alike!

After years of planning, the PURINA® Event Center is unveiled. Designed to host even the largest cat and dog shows, the indoor exhibition space features a padded sports floor, 150+ grooming stations and dedicated dog bathing room.

Leave us a message

You almost have it, for your 1st coupon order "5DESCUENTO" 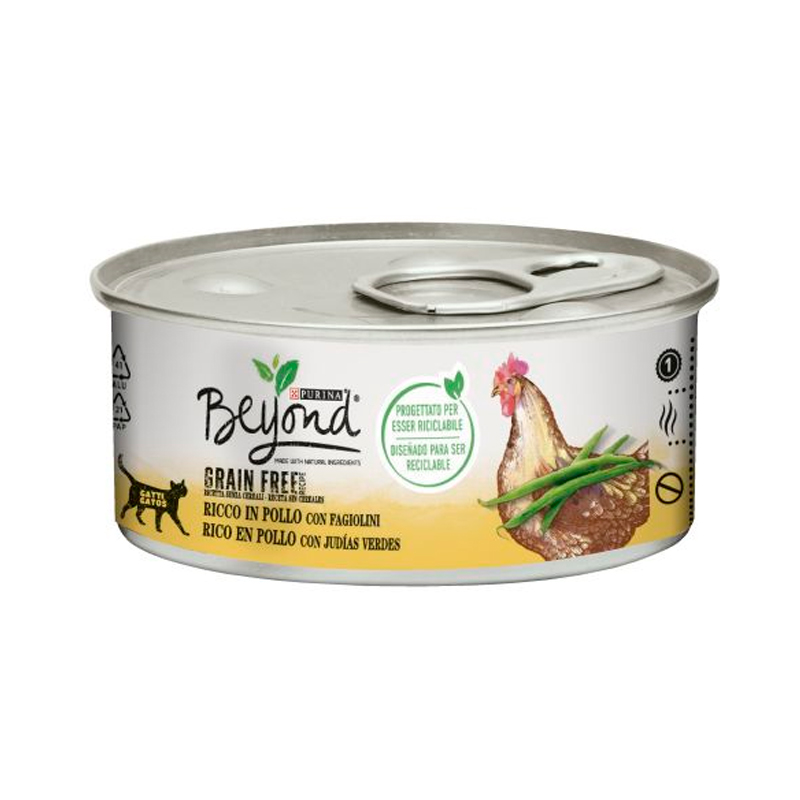 PURINA® BEYOND® Grain Free Mousse Cat Chicken Beyond (R) Recipe Without Cereal offers a wide selection of cat food to help maintain your health with the same great nutrition you expect from us. Going beyond cereals, we expanded our offer of cat food by offering an alternative combination so you can choose the one that is best for your cat. This recipe without cereals has recognizable ingredients that you trust, which provide your cat with high quality proteins. CHARACTERISTICS AND BENEFITS - Complete wet food for adult cats with Selected Natural Ingredients and without Cereals - Without Cereals - with Selected natural ingredients - Chicken is the ingredient # 1 - DOES NOT contain artificial colors, flavors or preservatives added - NO gluten added INGREDIENTS AND ANALYTICAL COMPONENTS Chicken (24%), Pork, Turkey, Dehydrated Pork Protein, Mineral substances, Green beans (1.1% dehydrated green beans, equivalent to 9.9% green beans), Natural Ingredients. Nutritional additives: IU / kg: Vit A: 920; Vit D3: 128; mg / kg: Ferrous sulfate monohydrate: 34; Anhydrous calcium iodate: 0.50; Cupric sulfate pentahydrate: 3.3; Manganous sulphate monohydrate: 4.7; Zinc sulphate monohydrate: 60. Analytical components: Humidity: 80%, Crude protein: 9.5%, Oils and crude fats: 6.7%, Crude ash: 2.3%, Crude fibers: 0.3%. DAILY RATION AND USE How to use and recommended daily ration: for a medium adult cat (4kg) serve 3 cans a day in at least 2 separate meals. The average maintenance rations for adults are based on cats with moderate activity under normal environmental conditions. Individual needs vary and the amount of food should be conveniently adjusted to keep your cat at a lean and healthy body weight. Always leave clean and fresh water at its disposal. Product #: 12352375
€0,88 In stock